No, not the Patrick Swayze movie from 1984, it’s the India Red Ale (IRA) special release from my favorite brewery Ninkasi Brewing. They released it just this month and are running it only through April.

As you might expect, this is a red ale. I had never heard of an IRA before so this was an interesting experience. This beer is heavy on the hops, with 75 international bitterness units (IBU), which measure the bitterness of a beer. It poured a rich golden red color with bright white, soapy head. The hoppiness was the first thing to hit my nose, followed by some barely identifiable fruit flavors. Tasting it was like a punch in the mouth with the hops completely dominating the first sip. After working through the bitterness, it was followed by very distinct flavors of papaya and mango. The official description of the beer says that pineapple should be apparent, but I couldn’t pick that one out. Maybe my taste buds were fried from the unexpected kick of the hops. The finish was pretty nice, with mellow fruit flavors and a warm maltiness that helped smooth out the whole experience.

A nice beer, if you’re an IPA fan. I am not, but I did appreciate how much more drinkable this beer became as I went along. 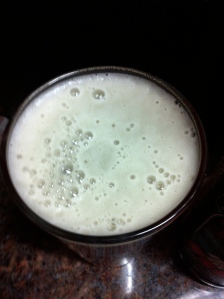 This entry was posted on January 13, 2014, 8:00 am and is filed under Musings & Funnies. You can follow any responses to this entry through RSS 2.0. You can leave a response, or trackback from your own site.