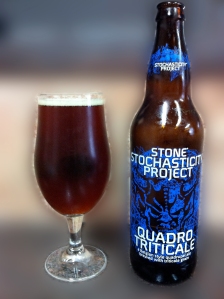 I saw this beer and had to try it. Generally speaking, Stone Brewing does not bring to mind a whole bunch of creativity in their brewing. Self-marketing, a lot of hops and some more self-marketing, perhaps, but when I see a quad on the shelf, I can’t help myself.

This brew’s name is a shout to randomness, perhaps in what they see as a departure from their normal brewing style. More likely, it is probably a reference to the fact that they included triticale, a kind of wheat-rye hybrid, into a brew traditionally made sans both wheat or rye. Stone’s Stochasticity Project (pretty slick site, too) consists of a collection of three beers: two Belgian trappist ales and a double IPA.

Quadrotriticale is the booziest of the bunch, at a whopping 9.3% abv. It pours a clear deep, reddish-brown color, with white head. The came with a maltiness and, as expected, a sour smell due to the type of fermentation used in brewing Belgian ales. These beers use what is called spontaneous fermentation, which is beer exposed open air to allow the yeast and bacteria essentially infect the beer. This is what gives this style of beer its characteristic sour taste, as well. Definitely an acquired taste for some, I enjoy it. 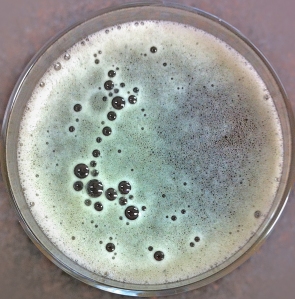 The taste was not as I expected. As I mentioned, Belgian ales are usually fairly sour tasting, but quads are far richer than their dubbel and tripel counterparts. The sourness was the first thing I tasted, followed by a richness that the deep dark color gave away at the top. The next thing to come through was the alcohol. The warmth was a very nice way to mute the sourness and made me forget for a second I was drinking a Belgian beer. The sweetness was the last thing I tasted, before the sourness came back on the aftertaste.

I enjoyed this beer. Overall, I would rate this beer:

This entry was posted on July 21, 2014, 2:00 pm and is filed under Musings & Funnies. You can follow any responses to this entry through RSS 2.0. You can leave a response, or trackback from your own site.