I’m Dreaming of a Red Christmas

Posted by Someguy in Musings & Funnies on December 8, 2014

December is here and with it, comes my favorite holiday: Christmas! It must be up there on the list of favorite holiday seasons for the folks at AleSmith as well, as they have a semi-annual release called YuleSmith. The summer version is a huge double IPA, but in winter, it is an imperial red beast. Let’s get into it, shall we?

This one poured a rich, dark brown with tiny bubbles and creamy off-white head. It smelled quite hoppy, with a slight fruity sweetness hiding underneath. It tasted slightly hoppy at first, with some nice roasted malt flavor toward the middle. It had a great, smooth mouthfeel, until the hoppiness came back a little too strongly and took over from there. There were some interesting slightly fruity caramel notes on the finish, though I was left with the sensation that I had just had a mouthful of hops.

For a beer that held such promise, I felt it relied a little too heavily on the hops. This surprised me, as it posts only 48 IBUs. I’m rating this one:

To celebrate Day 8 (Friday) of The Best Week Ever, I decided to stop by a few different places– you know, for perspective. The first stop I made was right after work at AleSmith Brewing Company in Mira Mesa. This is another of the many microbreweries hidden away among the many industrial office complexes dotting the landscape. I have only been here once before and it was some time ago, so away we go. 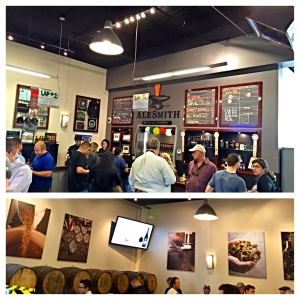 Walking in, I was greeted by two employees handing out tickets to people. To the left was the tasting area, with cocktail tables and chairs and the tasting counter/bar area. To the right and back a bit was where the brewing magic happened. All the way out the back of the place was a little seating area where they also host whatever food truck happens to be visiting any given day. This day, apparently, they had a release party going on for their Barrel-aged Vietnamese Stout. Sounded delicious…and highly alcoholic. Besides, I had no ticket, so I just headed to the counter.

The first sample I ordered was the AleSmith Nut Brown on nitro. This poured very dark, with creamy whitish head. It smelled rich, with lots of roasted malts, something like brown sugar aromas and bourbon toward the end. The first thing I noticed on the taste was how rich and smooth this was for a brown ale. All of the malts were up front, though not overpowering or enough to coat my palette. It went down very smooth with a malty sweetness on the finish. This one gets:

I finished at AleSmith by trying their X Extra Pale Ale. It poured very bright, pale yellow, cloudy and looked very refreshing. Bitterness, citrus and hoppy fruitiness met my nose upon smelling it. The taste was bitter at first, but some fruity sweetness made it through. The bitterness quickly returned and lasted through the finish. There was a little refreshing fruitiness on the aftertaste. Although I liked this one a little less than the brown, I still give it: 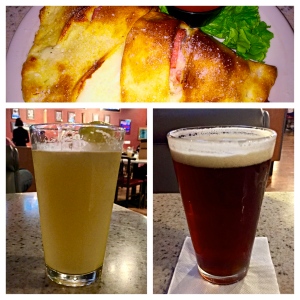 After that, I headed over to Oggi’s Pizza & Brewing Company in Mission Valley. This is a great place to catch any sports game on tv, have pizza and some great brews. They have a number of locations, this one in a shopping mall area in the shadow of a Costco and an IKEA. The layout is warehouse-like, with a cavernous seating area of both booths and tables. The brewery is straight back, with unfortunately small viewing windows. The bar area is somewhat closed off by a windowed retaining wall to the left, as Oggi’s appeals to lots of families with kids, as well as the sports-loving, beer drinking crowd. Speaking of beers, they have a ton to choose from, but I always initiate any visit to a brewhouse by trying the proprietary stuff.

I started with Oggi’s Duck Dive Hefeweisen. This was bright yellow, unfiltered (as it should be), with only a little soapy head. It smelled quite citrusy and light. There was virtually no taste at first, but then some sour citrus made it through. The light carbonation helped move the beer through to a light finish, with only a little citrus on the aftertaste. It was not as wheaty or bready as advertised, nor as much as I had hoped. For that reason, I’m giving it: 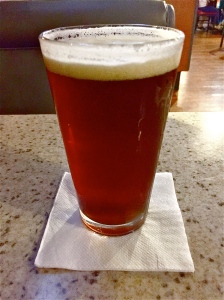 Next, I moved on to the Sunset Amber Ale. This poured a rich dark red-brown, with creamy head that really stuck to the glass. This told me that this beer would have a whole lot of malty richness to it. Light aromas of sweet roasted malts and slight fruitiness made their way out of the glass on the smell. I tasted rich malts, a very pleasant creaminess and some bitterness. The bitterness did not last long and quickly faded through the finish back into the rich malt character that defined this beer throughout. I really appreciated the heavy malts in this beer, so I give it:

I finished my celebration of Day 8 by searching for a pub (I’m a sucker for pubs). Finding one in the Normal Heights neighborhood, I met some new friends and enjoyed Guinness and Smithwicks the rest of the evening.

Shot through the heart! 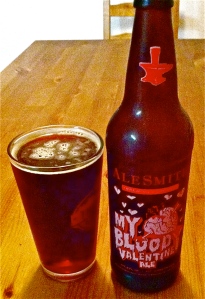 …and this wonderful liquid is to blame. Happy Valentine’s, everybody! If you drink this particular brew from AleSmith, it will be extra happy, if not a bit hoppy (sorry…) Anyway, My Bloody Valentine Ale is a beer for all you love-sick beer drinkers out there.

This red ale pours a deep red color with off whitish, soapy head that dissipates quickly. The picture to the left was taken about one minute after pouring. The first whiff brought a floral scent to my nose, quickly followed by a sweet maltiness that excited by taste buds. When my buds finally got their turn, they told me I was tasting a sweet, flowery IPA style beer. At this, I thought, “Uh oh…” The hoppiness subsided quickly and was taken over by the wonderful malty flavors this beer delivers in abundance. I was left with a pleasant malt flavor in my throat, with faint hints of the sweet flowers.

At 6.66% abv (cute, right?), the alcohol is not too much to take, but for me the floral hops may give me some trouble were I to drink more than one in a sitting. Still not a bad beer by any means. 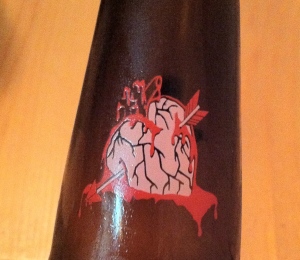