New English- A Blurb on Bourbon

Bourbon barrel-aged Batch #6 stout (6.6% abv): This beer poured deep chocolate-brown with a slight haze and light white fizzy head on top. It gave off strong bourbon aromas with a little bit of chocolate. The first taste was mild with a bit of sweetness. Then the boozy bourbon flavor kicked in, with a touch of maltiness into the middle. Medium body and light carbonation lead to a pretty mild finish with mild bittersweet chocolate on the end.

Above the 33rd parallel in Vista, CA sits a small brewery among a backdrop of rolling brown hills, strip malls and industrial office parks called Latitude 33 Brewing Company. Seekers of this place have to know a little about the area to get there, methinks, but I found it ok and boy am I glad I did. Occupying the former home of Green Flash Brewing, the first thing I noticed was Irish music playing in the background (recorded, not live, unfortunately). This immediately got me in the spirit.

The entrance had a pool table, ringed with stools and a counter area. This led to the main brewery and tasting room. It was a very small, tidy space, but this only served to concentrate and enhance the working brewery atmosphere. The intoxicating smell of roasted barley and malts was thick in the air, which only got me more excited to get to the beer.

I decided to make my own sampler and started with the Straw Horse Wheat. This one poured a very clear pale yellow, with thin white head that left only a little lacing on the sides of the glass. Citrus, mainly lemon, aromas dominated the smell. The taste was very fresh and lemony, propped up with a malty backbone. Light carbonation helped give this one a light-medium mouthfeel. There really was not much else to this beer.

Next, I sampled the Honey Hips strong ale. At 8.3% abv, I expected a boozy sipper. It poured a cloudy golden amber color with pale off-white head that did not stick around long. Sweet roasted barley came first on the smell with some spice afterward. True to this brew’s name, the taste was strong and boozy, but lots of malty sweetness helped to temper it. Medium carbonation and medium mouthfeel helped bring out some plum flavors and sugary malts after the booziness subsided a bit. It finished a little heavy and boozy, but enjoyable.

Then I moved on to the bourbon barrel aged stout. This was an off-menu item when I was there and the bar tender just suggested it when I ordered their regular Breakfast Stout. Don’t tempt me with a good time… of course I had that instead! This beauty poured black, with thick tan head that really had some staying power. Even though it was like a thick cap on top, it still allowed the potent boozy aromas of the namesake bourbon through on the smell. Whiskey and sweet malts flooded my nose and it was wonderful. The taste was all whiskey up front. It was almost overwhelming, but then some sweet malty flavors came through, before the bourbon came back and lasted through the finish. This was a rather thick and boozy beer, but I definitely liked it.

I was going to stop there, until a friend asked if I wanted another. Since I switched the Breakfast Stout out of my original order to accommodate the bourbon barrel stout, I considered it only a short while before enthusiastically agreeing.

This one poured thick and black, with tan head that stuck around about as long as that of the bourbon stout. It smelled sweet and malty, with a touch of vanilla. Being a “breakfast” stout, I expected some coffee aromas, but none materialized. After my surprise at how light this stout was subsided, I did not have to wait long, as it was all coffee flavor up front. Then some sweet vanilla came through, before the strong coffee came back through the middle of the drink, lasting through the finish alongside some moderate booziness.

At 8.5% abv, I am not sure I would have this with breakfast, but good nonetheless.

All in all, this is a great little brewery that makes some really tasty, if undynamic beers. I’ll definitely be looking them up in the future.

No, you are not seeing double. Ballast Point Brewing Company has opened a third brewery in San Diego! This is great news for me, as I work just up the road a piece from this particular location. It is in the middle of an expansive and otherwise unremarkable industrial office complex. At least it is labeled well (and huge!).

Walking in, I immediately noticed the fondness for wood, rope and glass. It invokes, as I suspect was intended, the feeling of being on a sailing ship. 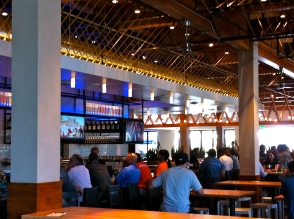 The lines of sight allow a wide open view of the entire tasting room and (future) restaurant. The bar takes up a considerable amount of the room, which is good, as they have a number of great beers on tap to try. 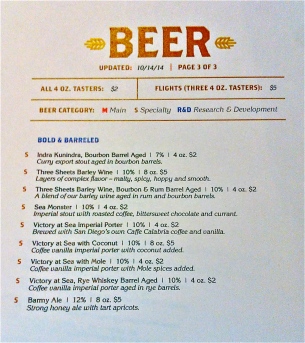 Of course, this is just part of the beer list they have, but it gives you an idea of what is on offer (as well as the beers I sampled while there…but more on that later.) They also have tours of their brewing facilities available every 15 minutes or so. This was exciting for me, as I am kind of a nerd for that kind of stuff. On the tour, we learned that they can make 150 barrels of beer per brewing run. In addition, they also have capacity for 300 bottles and 300 cans. That’s a ton of beer! This is great news, as they have some great stuff. 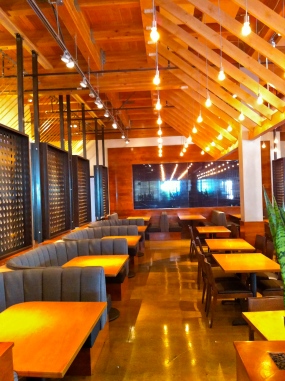 Now, for the beer sampling! I couldn’t decide on any beer(s) I wanted a full 16 ounces of, so I got a flight of three different ones. First was the Three Sheets Barley Wine, Bourbon & Rum Barrel Aged. At 10% abv, I knew it was going to be a big one. It poured dark and cloudy (stormy, even?). It was a slightly reddish color with persistent brown head. It smelled slightly sour, very malty and thick (if a texture can be a smell.) For a 10% beer, it did not taste very boozy. Instead, I tasted sweetness up front, with a stickiness that would not go away. That sugary profile was dominant and carried right on through the finish. 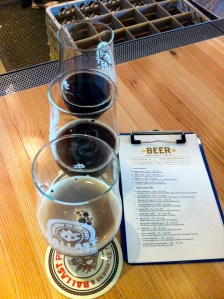 Next, I tried two variations of their flagship stout, Victory at Sea. The first was one with Mole. It poured very dark with the consistency of motor oil and dark, quickly dissipating head on top. I was actually surprised at how quickly the head went away, as stouts tend to pride themselves on their staying power. The very first aroma coming from the glass was very prominent chocolate flavors that were slightly bitter and very rich in coffee and vanilla. Though I didn’t get any spice on the smell, it was definitely apparent on the taste. It hit right up front and persisted throughout. I was surprised again by the small amount of mole/chocolate flavor that only came through in the middle and quickly faded to the same spiciness that started it all. Despite the lack of a very dynamic profile, I enjoyed this one for its uniqueness.

I finished up with Victory at Sea, Rye Whiskey Barrel Aged, another big stout. This one also poured black with quick brown head. It smelled very boozy, despite having the same alcohol content as the previous two I had tried. After the strong alcohol aroma, I got some rich chocolatiness. The taste was very rich, mild and boozy. Heavy whiskey flavors dominated up front, with some chocolatey bitterness to follow, followed by some spice from the rye. Not too much sweetness, despite the rich taste, but it finished a little sticky and still very boozy. I like whiskey and I think they went a little heavy on the whiskey flavors in this one.

Overall a very nice brewery from a brewer of some of the best beers in San Diego.

Sailing Under the Influence

According to Wikipedia, a Carrack was a three- or four-masted Portuguese sailing ship. Christopher Columbus even used one. More importantly, it is a beer made by the good folks at Mission Brewery. I’ll be honest- I got it mostly because of the pirate ship on the label…though I do like the product over there at Mission. Also, this is one of my favorite kinds beer: imperial red ale.

This is a HUGE beer (over-emphasis indented). At 10.2% abv, I expected a good time with this one. It poured a deep rich reddish-brown with a creamy cap of light off-white foam on top. That cap of head didn’t let much of the aromas out of the glass, until I broke it by sneaking a taste before smelling it. Despite the process being out of order, I always appreciate good head (*snicker…sorry). 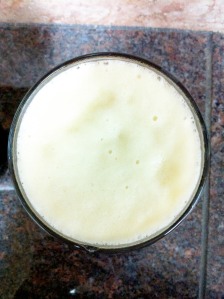 expect from an imperial red. But that quickly gave way to a warm maltiness, with hints of brown sugar. On the taste, it hit the front of my palate with the sourness of the aroma that reminded me of a Belgian-style beer. But, like the aroma, that mellowed quickly to the warm maltiness I was looking for. There was also the mild sweetness from the brown sugar notes I detected on the smell. It finished mellow with a huge alcohol burn afterward.

I did enjoy this beer, but I think any abv over 10% is a little much.

Overall, I would rate this beer: