In the same parking lot as Pacific Brewing, there is another small brewery called 2 Kids Brewing Co. This is a funky little place, with yellow and lime green on the walls, eclectic art on those walls, including a clock, which is unusual for a brewery to want you to know how long you have been drinking. Three patio tables are all that fits right in front of the tasting counter, which is manned by a very quirky, but nice bartender who was more than happy to talk about their beer with me. There are three brew tanks to the left and a walk-in freezer right behind the bar. That’s about it in this very utilitarian space. They have a delivery deal with the neighboring sushi place, same as Pacific Brewing. 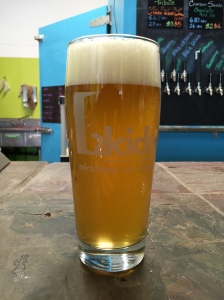 Searching their board for my tasting selection for this visit, I settled on one made with my very favorite hop variety: Hulk Smash Single Hop IPA w/Chinook. They don’t mess around at this brewery: they pour imperial pints! For $5! Why am I yelling?! Unfiltered, this one poured cloudy and golden with sudsy head that slid down the glass. Mild and malty aromas combined with very light fruity hops to make me excited to taste it. The taste was just as mild as the aroma. Malty flavors came through first and some very light hoppiness followed. The middle was a little sour and bitter, but was nothing to take away from the great piney Chinook hop flavor. The finish was a little dry and only very slightly hoppy with some malts trailing. This was a great, dynamic beer.