There comes a time in every beer drinker’s journey when stars align, worlds collide and things match up as if by Kismet. Now, this may be overstating a bit, but how could I pass up an opportunity to try a release by my favorite brewery that involves one of my favorite games/pastimes as a youngster with one of my favorite pastimes as a grownup? Answer: I couldn’t. Enter Ninkasi Critical Hit Barleywine. As an infrequent fan of barley wine at best, I was skeptical for only a second before diving right in, due to the theme of this particular barleywine.

This nerdy beauty poured dark amber with medium white head that characteristically does not stay around long. Aromas included bourbon and plum, with some spice and maybe a 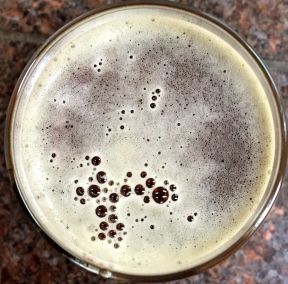 little apple coming through. The taste was strong, with lots of malt up front, followed by what I could only identify as grapes. It had medium mouthfeel, with little carbonation felt mostly toward the back of the throat. Whiskey flavors came on after the malt, turning to more of a spiced wine flavor. It finished somewhat spicy, with whiskey trailing at the back of the throat.

Even though it was a little tart and un-beerlike for my general taste, I very much enjoyed the complexity that this brew gave me.