Every year, the San Diego Brewers Guild puts on a festival celebrating all the magic and splendor of beer, brining together breweries big and small at multiple events from all over the county. Needless to say, I am very excited to hear there is such an appreciation of beer and the culture that surrounds it. I have not made my way to any of the sanctioned events yet,  but I celebrated in my own way. 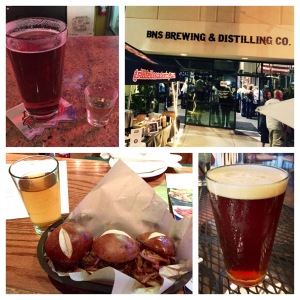 I started the party at Rough Draft just down the street from my work. I started with my standard Weekday IPA. Then I had two tasters of their barrel-aged offerings: Emboozlement Tripel and Freudian Sip. These are a couple of big beers. The tripel was surprisingly rich, but refreshing. It was sour, but had a nice malt backbone that smoothed it out nicely. That got me ready for the Freudian Sip strong ale. This was like both smelling and drinking almost straight bourbon. It had some nice malty sweetness in the background, but the bourbon was definitely front and center. I loved it.

From there I moved on to a local Mexican restaurant named Emiliano’s, where I had my standard at such a place: shot of tequila and a beer, this one Dos Equis (this is not exactly a beer destination, but still good.) Leaving there, I went down the street to San Diego Brewing, a place I am sorry to say I just started going to not long enough ago. These guys have tons of beer on tap and pretty good food. It’s also a great place to catch a game, if you are into that sort of thing. I went with their Grantville Gold, one of the brews they make there on site. This is a good light beer, though not a light beer, per say. I mean to say it is easy-drinking and won’t overpower other things you might eat or drink. It is also fairly low abv at 4.5%, so you can still have fun after you are done with it. 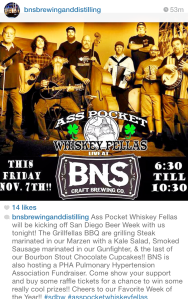 Done with dinner, I decided to head home for a bit to call it a day. Then my buddy came home and invited me to BNS Brewing with him. Well…what could I say? After all, it is Beer Week. So off we went. It turned out they had some goings on for the festivities as well: Grillfellas BBQ serving up some goodness and a live band. For my beer selection, I chose the Gatling Gun Imperial Stout, which seemed like a good one to go with my grilled chicken apple sausage and chocolate imperial stout mini-cupcake. Yeah, it was every bit as good as it sounds…the stout was warm and smooth, but not boozy, despite its 9% abv. It was very heavy on the chocolate and moved quickly to coffee thereafter. It finished fairly clean, with strong chocolate bitterness and coffee lingering for some time after. It would make a fine nightcap and it did.

I had a great start to SDBW2014 and will try to post here of my ongoing adventures celebrating this most wondrous spectacle.