I Have a Confession…

Taking a little break from our trip through Ohio, let’s check out a place a little closer to home. In another beachside town north of San Diego, I stopped by yet another mall with all kinds of stores, fancy and not-so-fancy alike all nestled by the beach. Among those stores and mere steps from the sand, there was a tasting room from The Lost Abbey called The Confessional. This was a very unique tasting room, with lots of dark colors and unfinished wood. A roll up door to the right looked out onto the promenade and an L-shaped tasting bar stood straight ahead. Carved trees to the right gave the impression of a holding area for Rose Parade floats, but a semi-circular bar around the trees was enough to distract me from caring. There were also small booths to the right and small tables in front. Chandeliers that looked like real candles helped complete the churchy vibe they were going for. 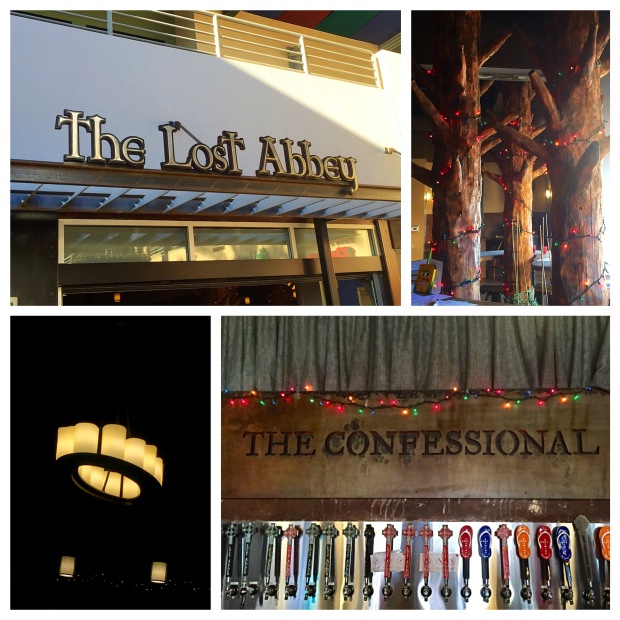 To fully experience the place, I decided to go with a flight; not just any flight, but the Rare Beer Flight, which came in two parts. 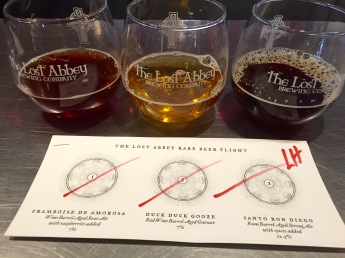 The first part started with the Framboise De Amborosa wine barrel-aged sour ale with raspberries (7% abv): The first one poured dark cloudy amber with soapy white head. It smelled tart, with lots of berry fruitiness and a spicy raisin aroma. The taste was mild at first, with heavy sourness following and a bit of bitterness into the middle. With a light body and light-medium carbonation, this drink finished tart and sour, with a nice little malty spice on the end.

Next up on deck was the Duck Duck Gooze red wine barrel-aged Gueuze (7% abv): This one poured rich golden with light white head. Mild and slightly sour aromas distinguished themselves most, with virtually no fruitiness, despite being typical of the style. It tasted slightly sweet, with some light grape flavor and a little tartness into the middle. Light in both body and carbonation, this beer finished somewhat tart with a light wine flavor trailing. A little too one-dimensional for me.

Closing out the first half of the flight was the Sanyo Ron Diego rum barrel-aged strong ale with spices (12.5%): This beast poured dark red-amber in color and slightly cloudy, with thin white head. It smelled VERY alcoholic, with a little spiciness and a touch of dark fruits. The tastes was quite boozy, with a little spiced raisin and heavy rum flavor. A little brown sugar and maybe a touch of maple revealed themselves going into the middle. Light-bodied and lightly carbonated, the drink finished equally boozy, with overpowering rum alcohol warmth trailing. A little too heavy on the alcohol for me.

After recovering from that last blast of booziness, I staggered (not really) to the bar and ordered the second half of the flight. It began with Red Poppy wine barrel-aged sour ale with sour cherries (5%): This one poured bright, rich red, with thin loose head. It smelled mild and sweet, with noticeable cherry aroma and some maltiness. The taste was somehow both rich and mild. There was some maltiness before cherries kicked in and a little hoppiness into the middle. Light body and light-medium carbonation lead to a sweet finish. I enjoyed how dynamic this one was, not to mention the reprieve from the higher abv of the previous beers.

As it tends to do, fate heard my relief and squashed it with Agave Maria tequila barrel-aged strong ale with agave (13.5. %): This behemoth poured a cloudy light brown-red color with loose off white head. The aroma was malty sweet with a slight sour tequila punch. It tasted malty sweet and a little sour. A touch of dark fruit and some warm alcohol followed into the middle. Medium in body and light in carbonation, this beer finished rich, with the malts and sweetness returning and the alcohol lingering. I enjoyed this one, as it didn’t have the alcoholic punch of the Sanyo Ron Diego.

Rounding out this team of all-stars, the Cuvée de Tomme wine barrel-aged sour ale with sour cherries (11%): The last beer of the flight poured dark red like wine, with loose tan head. It smelled of tart grapes and cherries. The taste was also tart, with cherry sweetness up front. Some booziness followed, with some sourness into the middle. Light-medium body and lightly carbonated, this one finished boozy, with a little stickiness from the cherry sweetness. Not a strong finish, but tasty enough.

All in all, I definitely enjoyed my trip around the world of rare beer offered by Lost Abbey. I got to try some styles I would not normally have otherwise and the ambiance of the place was definitely something to behold.