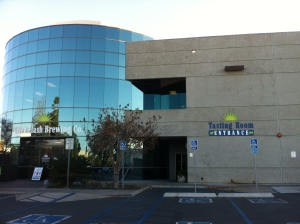 Last night I had the opportunity to go to the Greenflash Brewing Company. I was a little afraid of this one, since I had yet to fully check out their selection. I only knew them as purveyors mainly of IPA style beers, which don’t like me very much (they give me heartburn that feels like a volcano in my chest).  Despite having a menu made up mostly of IPAs, turns out they have a few really good brews. 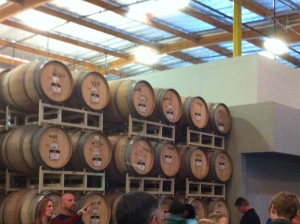 I started out with with a Double Stout Black Ale. This was an excellent place to start, not the least of the reasons being that stout is one of my favorite styles of beer…the nearly 9% abv helped, too. 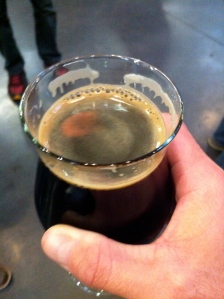 It was served in a 13 oz. tulip glass, which was a little fancy, but a pleasant surprise compared to the 8 oz. glasses I normally find in tasting rooms. The head was a nice rich tan color, hugged the sides of the glass only slightly and didn’t really hang around too long. It had a nice caramel smell, with a little bit of bitterness. The taste was rich and slightly creamy, with not much alcohol taste, but the warmth showed up toward the end. Overall, a very mellow beer that I would definitely recommend.

Next, I decided to go a little lighter and had the East Village Pilsner, a very light and fresh-tasting beer that is very easy to drink. There wasn’t much head on it and it smelled every bit as clean as it looked. At 5.3% it is a nice cool down beer.

Except that I didn’t stop there and had a taster of Hamilton’s 7th Anniversary- Junior IPA– I know, I know, it’s an IPA. This was actually pretty mellow as IPAs go. It had a bright red color with bright white head. It smelled heavily of the hoppy character you would expect from any IPA, but the taste was actually a little malty at first. The hoppiness came immediately after, but dissipated quickly to leave the floral notes I expected at the top.

All in all, it was a great trip to a brewery I had initially expected to not like too much. Surprises are the name of the game. After all, ’tis the season!