Hop on the Good Foot 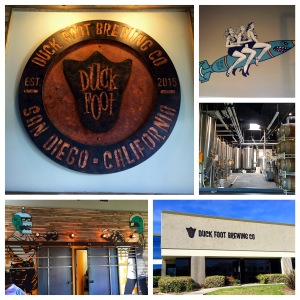 The Miramar/Mira Mesa area is known for an abundance of breweries. One fairly new brewery (est. 2015) tucked away in another industrial office park was Duck Foot Brewing Co. This small brewery had its own parking area, rare for many tasting rooms and breweries around San Diego. Walking in, I was struck by the wall to right paneled in unfinished wood slats. The rest was treated concrete and industrial looking pipes. The tasting bar was directly to the front with white subway tile behind, surrounded by dark metal bolted to the wall. There were also tasting tables in front of the door and a counter around the windows overlooking the street outside. The tasting counter continued off to the left where the brewing area was. There were also giant murals on two of the walls of Rock’em Sock’em robots with boxing gloves and two pin-up girls riding a rocket painted like a shark.

I started with the IPA w/ginger on cask (unknown abv). This beer poured a creamy opaque orange-yellow color, with creamy white head. The aromas included ginger and fruity hops. I was surprised at how cold it was for a cask. It started smooth and light. The first taste was hoppy, a little fruity, creamy and dry. Then the ginger kicked in, but not overly much. The same tastes persisted through the middle, which was mild, light-bodied and lightly carbonated. It finished with mild fruity flavors and the light ginger trailing.

The sucker I am for beers on nitro, I finished with the Irish Stout on nitro (4.7% abv). It poured black, with a nice cap of creamy off white head. It smelled first of coffee, then of bittersweet chocolate and a touch of vanilla. It tasted creamy and mild at first. The coffee came on after, with a little chocolatiness. The middle was still mild, with light body and light carbonation. It finished with a little sweetness and more chocolatey coffee flavors.

This was a cool brewery, with a lot of potential.